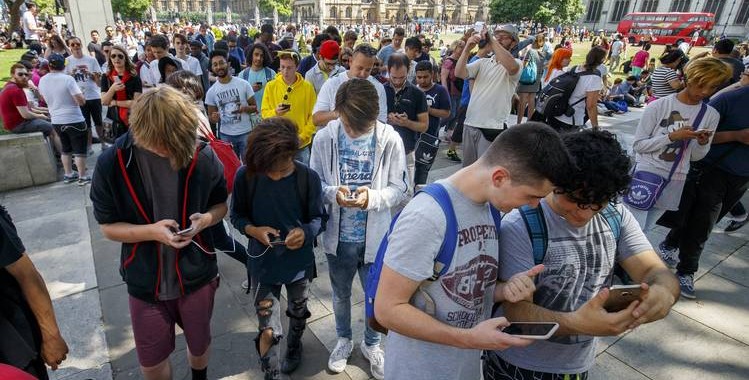 Millions of people being more active is a terrific side effect of chasing Pokémon. On the other hand, the new virtual reality game Pokémon Go has also been blamed for injuries ranging from traffic accidents to falling off a cliff.(1)

In addition to stumbling into things, by far the most common health hazard posed to players is Pokémon Posture. Computer jockeys and frequent texters are too familiar with tech-neck, but walking while obsessing over capturing virtual monsters adds to a real-world problem.

Pokémon posture is most pronounced when you see the top of a person’s head – instead of their eyes – as they approach you.  It’s apparent in the above photo of a crowd at a PokéStop.(2)

The problem is our arms are made to swing when we walk, which works and balances the muscles of our torso and pelvis. When players walk while focused on the game, the head goes forward, shoulders roll in and torso collapses onto the pelvis, folding the body into a “C”.

A big part of the perk of walking is exercising the ability to breathe deeply, but Pokémon posture locks the arms and folds the chest, training muscle patterns that inhibit taking a deep breath.  It also sets the stage for imbalances that cause neck and back pain.

Focusing on the reality of how a body stands is the key to retraining how it moves, as well as preventing potential accidents from walking into a tree while working to capture, battle, and train virtual creatures.

Pokémon was downloaded 40 million times in its first 3 weeks and has now passed the 100 million users mark. While it’s not the first game to connect online with real life, it is getting people out and moving in a whole new way.

If you’ve seen large crowds congregating in parks, public squares, or even your front yard and they are engrossed in a mobile device you’ve likely happened upon a PokéStop. Should you encounter a player approaching head-down, gently coach them into StrongPosture® aligning the head, over torso, over pelvis, over feet.