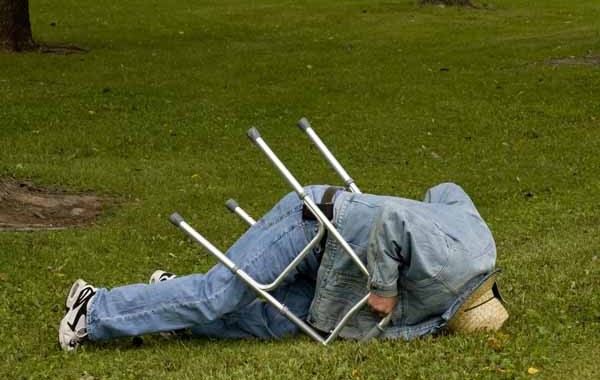 Fast head turns in elderly can drop blood pressure, resulting in a fall. Carotid sinus hypersensitivity proves to be a factor, and this sensitivity can intensify as one ages. The enlargement of the carotid neck arteries that regulate heart rate and blood pressure appear to affect the incidence of falls, as well.

From 2006 to 2008, researchers in the Netherlands recruited 105 people with a history of falls or fainting, and 25 healthy controls. Subjects were in their mid-to-late 70s. The study recorded changes in blood-pressure during head-turning tests of three different movements: left and right rotations and tilting the head as far back as possible. If systolic blood pressure (the top number) dropped more than 20 points during one of these movements, the study considered it to be a case of head-turning-induced hypotension. Blood pressure readings were also taken after the subjects stood, ate, and received manual massages of the carotid arteries.

Both the falls and control groups experienced significant hypotension of about equal magnitude, indicating head-turning hypotension isn’t found only in patients with symptoms of falling or fainting, researchers said. Systolic blood pressure dropped an average of 36 points.