The Supreme Court will decide the fate of US healthcare later this month, as they deliberate over the Constitutionality of the “ObamaCare” plan.  It seems, however, that either way, people will be paying more out-of-pocket costs.

A recent study conducted by the Centers for Medicare and Medicaid Services predicts that while current healthcare spending remains at historical lows due to recession, by 2014 those numbers will begin to surge – if the most of the proposed changes to healthcare pass, that is. 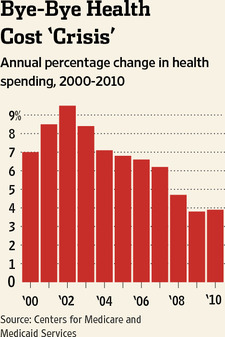 An article by Louise Radnofsky from the Wall Street Journal states: “Spending would jump 7.4% in 2014 when the health-care law is scheduled to be fully implemented, the analysts predict, as millions of Americans gain coverage through subsidized insurance plans purchased through government-run exchanges or through Medicaid, the federal-state program for low-income people.”
Though their predictions will be affected by changes in law or economy, analysts posit that with the implementation of new healthcare regulations that both young people as well as Boomers will increase the amount of money they put into healthcare through routine doctor visits and prescription costs.

J.D. Kleinke, in his article from the Wall Street Journal, states that the data from the Centers for Medicare and Medicaid Services is fueled by a change in consumer activitiy, suggesting that consumers are more involved in where and how their healthcare costs are spent.  He says, “The moderation [in healthcare spending] has been driven by cumulative improvements in medical care and by insurers, and by marketplace disciplines on the demand for medical care. Consumers are finally getting more involved in managing and paying for their own care.”

My take on these articles:  As costs rise and people become more concerned and aware of getting their “money’s worth” for healthcare, they will ask more questions about their health and demand value for their dollars.

How do we, as healthcare providers, answer the upcoming demands of patients?

My answer:  Engage people by helping them to care for their problem.  Work as a doctor-patient team to make the most of your time and their money.  By being assertive in addressing, correcting, and especially preventing ailments, you not only help your patients’ feel that they are getting what they pay for, but you also free yourself to do more of the same for others.  For musculoskeletal problems, your work as a doctor-patient team should include strengthening posture.  It is a billable service, but the benefits to your patients will allow them to feel better in all aspects of their health.