People ask me “What’s the best way to sleep? On my back, side or stomach?” A recently discovered system in the brain suggests there really is a best way to sleep, with implications for your back, neck and spine health.

Using mice that were genetically modified with genes from a glowing jellyfish, researchers found a previously unknown system which the brain uses to wash itself of waste. They named it the glymphatic system.

The “G” is not a typo – it’s Glymphatic, not Lymphatic. While the two are similar in function, your glymphatics are an independent system the brain uses to flush out toxic wastes. Researchers Nedergaard and Benveniste call it the “Brain Drain”. (1)

Glymphatics work like a dishwasher for the brain, according to the lead researcher Nedergaard. When you get less than a full night’s sleep, “It’s like if you only use a third of the water when you turn on the machine. You won’t get clean dishes.”

Alzheimer’s disease, Huntington’s disease, Parkinson’s disease and other neurodegenerative and auto-immune diseases are all are strongly likely to buildup of toxins and inflammatory immune cells. Since our brains are very active, a lot of “junk” is produced daily, which is why the authors call the new discovery of the brains drainage system “revolutionary”, and that it “plays a huge role in the health of the brain”.

Your sleeping position is also important to optimize the flushing out of toxins. Gravity is a big factor in a mechanical system with pipes and valves that’s moving fluids, so it’s not surprising that sleeping sitting up doesn’t let waste drain efficiently. Neither does stomach sleeping.

Sleeping on your back is somewhat better. However, for best flow to allow the glymphatics to drain fluid and the buildup of toxins, the researchers recommend lying on your side. Moving periodically is also a good idea.

In other words, over decades sleep quality, quantity and position can play a really big role in how you age – as well as your risk for many illnesses. It’s a strong reason to prioritize a good night’s sleep as a vital facet of overall health.

Which is where comfort comes in. Stomach and back sleepers unaccustomed to sleeping on their side may be restless when making a change. Designing your sleep environment for your sleep position means paying attention to the little things because they can make a big difference.

Low level postural stress from being in awkward positions stimulates pain receptors in joints and muscles called nociceptors. When nociceptor stimulation reaches a certain level, you may just roll over, or you might wake up with a twinge in your knee, a tightness in your back, or a cramp in your neck.

For your brain and your posture, here’s some tips by each PostureZone® to optimize your brain fluid’s flow with comfortable side sleeping (2):

Additionally, choose a mattress that’s supportive (see PostureMonth.org for how to choose the best mattress). Set consistent bedtimes and plan for ample shuteye. Sounds obvious, but if you’re exhausted when the alarm rings in morning, go to bed earlier. Avoid nicotine, alcohol, and caffeine just before bed.

Most of us should spend seven or eight hours a day sleeping. It’s a big chunk of life. So spend some time looking at making your sleep environment right to keep your body pain-free, standing tall, and thinking straight. 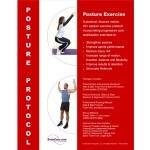 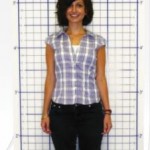 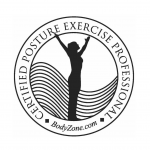